You are here: Home1 / Club News2 / Mr Versatility: George Martin, the Sportsman Who Could Do It All

George Martin played top level rugby and rugby league but was he good enough to have been an All Black?

George Martin might just be the best sportsman you have never heard of.

The 86 year-old died recently but leaves a sporting record to be proud of.

Although he played professional rugby league, his greatest achievement was arguably coming sixth at the Auckland Empire Games in 1950. 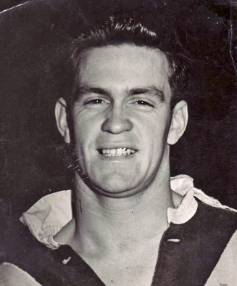 George Martin played for North Sydney after placing an advert in the Sydney Morning Herald advertising his services.

Always a natural sportsman, who excelled at every sport he played, the 19 year-old Martin decided to give the pole-vault a go. The only problem was he did not have a pole.

Martin sneaked into the Lower Hutt council’s Riddiford Gardens and under the cover of darkness, cut some bamboo.

With help from Canadian coach Theodore Gilmore  he qualified and was good enough to finish sixth.

It is a story you could dine on for the rest of your life but Martin had many other claims to fame.

* In the same year  he attended the Empire Games, Martin played rugby for Wellington, including the match against the British Lions.

* He played league for the North Sydney Bears and played for the Rest of Australia against the Kangaroos.

* In his second year playing league, he was named in the top five players in Australia.

* He played rugby for Hutt in a McBain Shield winning team.

* Played league for Wellington against Great Britain in 1958.

* Was the first golfer at Shandon to win the junior, intermediate and senior titles, and held the course record.

Looking back, his decision to play league in Australia seems curious.

Match reports from the 1950s game against the British Lions suggest he was a quality player, who had the potential to go far in rugby.

Martin put an advert in the Sydney Morning Mail advertising his services as a centre. He was signed by North Sydney for four pounds a week plus bonuses.

Son Brendan Martin is proud of what his father achieved but agrees the question that can never be answered is, was he good enough to be an All Black?

Given how well he did in league and his all round sporting abilities, Brendan suspects he could have worn the black jersey.

In an interview in 2000 with the Hutt News, Martin admitted to having a few regrets and had only played league for the money.

He hinted that he thought he was good enough to make the All Blacks and given his time again, would have concentrated on rugby.

The then 70 year-old liked the way modern rugby was played with the emphasis on attack, and believed he would have benefited from the modern approach.

Brendan said his dad always liked to talk about making the Empire Games as a pole vaulter.

He often wondered what his father could have achieved with modern sports science and training.

The question of whether he could have been an All Black will sadly never be answered but Brendan believed his father’s unique combination of sporting records would never be matched.

Speakers at the funeral included rugby commentator Keith Quinn who worked with Martin at the Avalon Studios and always regarded him as a very special sportsman.

Martin was also a gifted artist. He died in Wesleyhaven Hospital after suffering a stroke.

This article originally appeared on www.stuff.co.nz/dominion-post on Monday 29 May 2017, 12:38 pm as Mr Versatility: George Martin, the sportsman who could do it all.